Gary Clark Jr. bends musical genres like the strings of his hollow body electric guitar. As a kid in Texas, watching “Austin City Limits,” he was influenced by the eclectic acts that passed through his town – everyone from B.B. King, to Bonnie Raitt, to Robert Cray.  But while Clark has a firm foundation in the blues, he is equally at home with hip-hop, R&B, and scorching guitar hero rock. Cutting a long, lean figure onstage, he can lay down some of the heaviest chords this side of Hendrix or rip out your heart with a Curtis Mayfield falsetto. His music speaks with authority.

A rootsy singer and songwriter with a knack for heartfelt songs that draw on blues, folk, and country traditions, Langhorne Slim gives his music a sense of rough-hewn sincerity that can be both raucous and introspective. Langhorne is comfortable performing solo or with his combos the War Eagles or the Law, whose membership can expand or contract with his needs, though his performances tend to lean toward semi-acoustic contemporary folk. Langhorne Slim made an impressive, energetic debut with his 2005 album When the Sun's Gone Down, he began experimenting with bigger arrangements and production in 2009's Be Set Free, and 2021's Strawberry Mansion was a deeply personal set written in the wake of a personal crisis.

Strawberry Mansion is the singer-songwriter's seventh full-length album. He released his first record, Electric Love Letter, back in 2004. Since then he has graced the stages of Bonnaroo, Lollapalooza, Newport Folk Festival, and the Conan O'Brien show, winning fans over with his heart-on-a-sleeve sincerity and rousing live shows.

Born Sean Scolnick in 1980, Slim took part of his artistic moniker from his hometown of Langhorne, Pennsylvania, a place he's still very much connected to despite making his home in Nashville. Since the advent of Covid-19, he has been traveling back to PA once a month to see his mother and grandmother, and, like many Americans, finding strength in his origins and family bonds. The title Strawberry Mansion refers to the neighborhood in Philadelphia where both of his grandfathers grew up, a place he calls "dirty but sweet, tough but full of love, where giants roamed the earth and had names like Whistle and Curly." That idea of a mythical wonderland informs the new album from head to toe. Strawberry Mansion is not so much about nostalgia for the past as it is about the possibility of better days ahead in this world. These are songs that remind us we're all part of a collective "Mighty Soul," united in one journey, just like the characters in that old Philly neighborhood. It's a life-affirming album for these times. 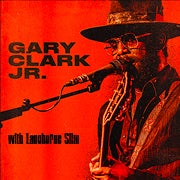