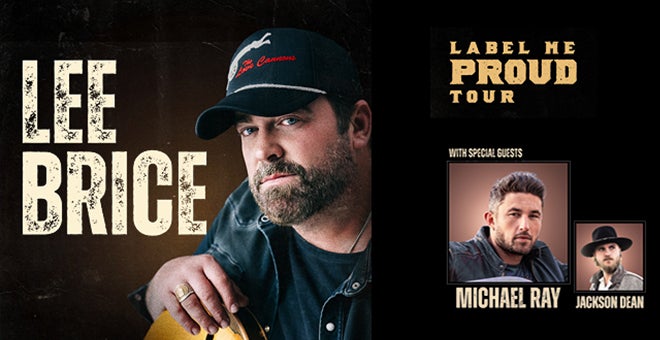 with Michael Ray and Jackson Dean

When Curb Records recording artist, Lee Brice, isn't selling out arenas, writing and recording songs, or building new brands like American Born whiskey, you'll find the family man with his wife Sara, two young boys, and daughter. Meanwhile, with over 3 billion on-demand streams, and over 3.6 billion spins on Pandora, Brice continues to enjoy massive success at country radio, digital streaming services, and on the road. He recently reached #1 at Country Radio with “Memory I Don’t Mess With,” which consecutively follows three prior #1s: ASCAP’s 2021 Country Song of the Year “One of Them Girls,” “I Hope You’re Happy Now” with Carly Pearce, and “Rumor,” which was nominated in the category Single of The Year at the 55th Annual ACM Awards. One of the most-played country artists of all time on Pandora, he was the second country artist behind Keith Urban to receive the Pandora Billionaire plaque. Lee is also a GRAMMY nominee, a CMA and ACM award winner, and he's taken nine radio singles to Number One: "A Woman Like You," "Hard to Love," "I Drive Your Truck," "I Don’t Dance," "Drinking Class," “Rumor," “I Hope You’re Happy Now," “One of Them Girls,” and “Memory I Don’t Mess With.” Garth Brooks, Jason Aldean, Kenny Chesney and others have recorded his songs, and he's performed on numerous TV shows, including NBC's Today, ABC's The Bachelor, NBC's The Voice and FOX's Miss USA 2018. Lee performed as part of the Library of Congress Gershwin Prize for Popular Song honoring Garth Brooks, aired on PBS March of 2020. At the 54th Annual CMA Awards, Lee took home the prize for Musical Event of the Year for his song with Carly Pearce, "I Hope You're Happy Now." At the 56th ACM Awards, “I Hope You’re Happy Now” won Single of the Year and Music Event of the Year, and Lee and Carly Pearce performed the song live. Lee’s latest album, Hey World, features new radio single “Soul.”

Florida's Michael Ray has a resonant voice and a knack for crafting vibrant, upbeat contemporary country-rock. Although he built a strong grassroots fan base in Southern Florida, he also gained prominence as the winner of the CW network's reality television vocal competition The Next: Fame Is at Your Doorstep in 2012. After taking home the crown, Ray signed with Atlantic Nashville, landing his first Top Ten hit with "Think a Little Less" in 2016. That track, along with 2018's breezy "One That Got Away," emphasized his facility with soulful rhythms and pop hooks, but his 2021's Higher Education EP underscored his harder country roots.

Odenton, Maryland native Jackson Dean is a singer/songwriter known for his old school, gritty style of Country. Mature beyond his years, Jackson has a daring and carefree spirit, having moved out at 18 years old to live in a cinderblock, concrete floor, one-room shack on the back of his grandfather’s property with no heat and no plumbing. Bringing that same sense of adventure to his songwriting, Jackson writes both independently and alongside outliers like Luke Dick, classic writers like Casey Beathard and everyone in between. Following the release of his debut collection Jackson Dean, Jackson continues to show people how real music can be with atmospheric, musically-forward album Greenbroke out now via Big Machine Records. Featured on the soundtrack for Netflix’s The Ice Road and in an episode of Paramount Network’s Yellowstone, the stomping “Don’t Come Lookin’” is making its mark as his first single at Country radio. Following an early career of local performances in his hometown, Jackson has joined bills with superstar acts like Toby Keith, Miranda Lambert, Brantley Gilbert, Kane Brown, Jake Owen and Brothers Osborne. For the latest information, visit jacksondeanmusic.com.