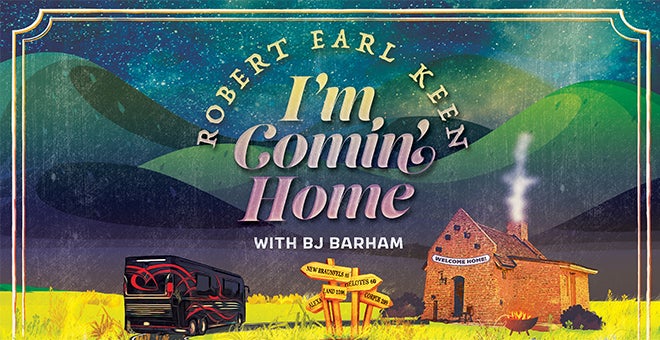 The Road Goes On Forever…until it doesn’t. Legendary Texas songwriter and entertainer Robert Earl Keen wraps up 41 years on the road with his 2022 Final Tour, I’m Comin’ Home: 41 Years On The Road.

Keen made the announcement in January, 2022, with a personal video posted on his social media accounts. “I’ve been blessed with a lifetime of brilliant, talented, colorful, electrical, magical folks throughout my life,” Keen said. “This chorus of joy, this parade of passion, this bull rush of creativity, this colony of kindness and generosity are foremost in my thoughts today. It’s with a mysterious concoction of joy and sadness that I want to tell you that as of September 4, 2022, I will no longer tour or perform publicly.”

With a catalog of 21 albums, his band of stellar musicians, and many thousands of shows under his belt, POLLSTAR ranked Keen in its Top 20 Global Concert Tours in July, 2021. Keen has blazed a peer, critic, and fan-lauded trail that's earned him living-legend status in the Americana music world.

The Americana genre was officially recognized by the music industry in 1998 and Keen was the first artist to be featured on The Gavin Report’s Americana Music Chart and on the debut cover of its magazine.

Keen continues to blaze a trail for other artists with Producer, Clara Rose, and their Americana Podcast. In 2019, Americana Podcast launched with the inaugural episode featuring Jamestown Revival and Lucero. The Americana Podcast has furthered the interest in artists Billy Strings, Lori McKenna, Drew Holcomb and I’m With Her.

A Houston native, Keen is one of the Lone Star State's legendary singer-songwriters. In 2019, at a homecoming at the Houston Rodeo, Robert performed with his college friend Lyle Lovett. The old friends opened the show for George Strait to a record-breaking audience of more than 80,000.

Keen was weaned on classic rock and Willie Nelson records. By the time he entered Texas A&M University, Robert taught himself how to the play the guitar and turned his poetic musings into songs. These early days are captured in spirit on the Keen/Lyle Lovett co-write, "The Front Porch Song," which both artists recorded on their respective debut albums, and in Happy Prisoner, REK’s bluegrass recording.

From the beginning, Keen took the road less travelled. He produced and financed his first album, No Kinda Dancer. Robert began to make a name for himself when he won the Kerrville Folk Festival's prestigious New Folk Songwriting Competition.

After his debut release, Robert moved to Nashville. He worked at the legendary Hatch Show Print as a pressman. When he returned to Texas, Robert had a publishing deal, a new label, and a national booking agent. He released The Live Album and West Textures, the seminal album which debuted the rowdy rockin’ fan favorite "The Road Goes on Forever."

Robert had no idea that his song about a couple of ill-fated lovers running afoul of the law would catapult into the stratosphere of classic Americana, but he credits DJ Steve Kaufman of San Antonio radio station KRIO for helping to start the fire. "Steve talked the station into doing sort of a free-form programming format during ‘drive time,’” Robert says. “It was anything he liked, which turned out to be great music and a last glimpse at the influence of the DJ on radio. With an organic boost from Kaufman, I went from playing the front room at Gruene Hall for a max of 150 people to playing a show in San Antonio for 1,500 people. That was a moment that kept me going; because before that, I'd been working for 10 years and had a lot of rejection but very little success."

Fellow Texas icon Joe Ely recorded both "The Road Goes on Forever" and "Whenever Kindness Fails" on his album, Love and Danger, and the secret was out on Keen's credentials as a songwriter's songwriter. He is now a member of the Texas Heritage Songwriter Hall of Fame, The Texas Cowboy Hall of Fame and the Texas Institute of Letters.

Robert continued to steer clear of the waters of the country mainstream. His authentic alternative to three-and-a-half minute repetitious radio tunes formed the perfect storm of Keen's literate song craft, razor wit and killer band. It stirred up a grassroots sensation not seen since the '70s heyday of maverick outlaw country.

The live performance, the show, is an essential experience for REK fans. BMI acknowledged Keen’s contribution as a road warrior in 2015 when they honored Robert with the inaugural Troubadour Award.

Keen and his band hit the road, going out 180 days a year, to play dance halls, roadhouses, theaters, and festival grounds with diverse crowds of college kids, serious singer-songwriter fans, and plenty of true believers.

In 2018, Keen returned to College Station to accept the Texas A&M Distinguished Alumni Award. The prestigious honor has been granted to only a few hundred of Texas A&M’s half a million alumni. The award recognizes Aggies who have achieved excellence in their chosen professions, made meaningful contributions to Texas A&M University, and in their local communities.

Keen will continue to write music and create, host his popular podcast, support young artists,and follow his artistic muse wherever it takes him.

Best known as the frontman of North Carolina alt-country outfit American Aquarium, singer/songwriter B.J. Barham has spent much of his career delivering rugged, earthy roots rock in the vein of Whiskeytown and Drive-By Truckers. A native of Reidsville, North Carolina, Barham formed the group in 2005 and, over the course of a decade, built American Aquarium's reputation from regional up-and-comers to acclaimed, internationally recognized act thanks to records like 2012's Jason Isbell-produced Burn. Flicker. Die. and 2015's Wolves. Inspired by the November 2015 terrorist attacks at a Parisian nightclub, Barham -- who was, at the time, on tour in nearby Belgium -- quickly wrote a new batch of acoustic-led songs that would eventually become Rockingham, his solo debut. In early 2016, with co-producer Bradley Cook, he and a handpicked crew of musicians recorded the new material in a couple of marathon sessions. The album was released later that year, earning positive reviews. Barham toured as a solo act as well, hitting all 48 states in the continental United States during the spring and summer of 2017. 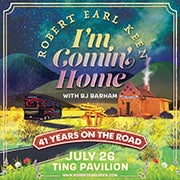 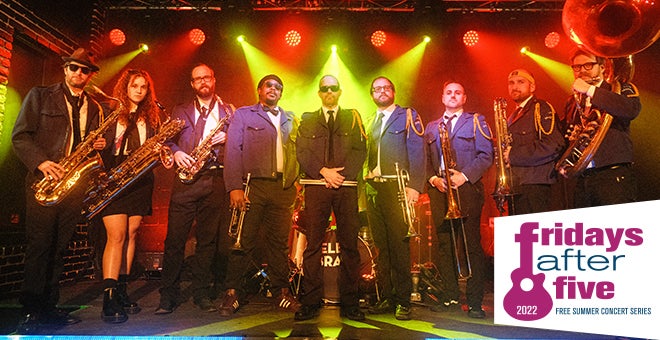